Marriage proposals have taken place for centuries and span a colorful rainbow in terms of execution and strategy, all with the same goal in mind – two people committing to spend the rest of their lives together. It’s a beautiful tradition and one we have been thrilled to be a part of many, many times.

The first took place in Flagler Beach where Preston got down on bended-knee and asked Viviana to be his wife. She said yes! The weather was great and the Aerial Messages sky letter banner proposal was perfect.

Preston shared this testimonial afterward: “It was so perfect and our pilot went above and beyond. They went around so many times to make sure we could get all of our pictures and did so much more than we asked. So, so grateful for this experience.”

Congratulations Preston and Viviana! Aerial Messages is wishing you both the very best.

The second proposal was planned by Cosme to propose to his partner Erin in front of their family and friends. We designed a sky letter banner with a heart for the airplane banner proposal. It was a clear, but chilly day and the banner looked perfect against the cloudless sky.

Cosme shared this testimonial after the flight: “Lina was so helpful with the entire process of my Aerial Messages marriage proposal. I can’t thank you all enough for making the fly-by a reality for me and my fiancé. It was the best!”

Congratulations on your aerial engagement, Cosme and Erin! 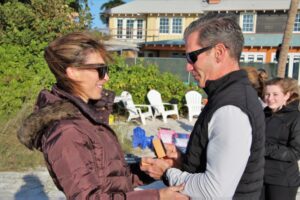 Request a Quote
Wife couldn’t stop smiling. My only regret is not doing this sooner.
J. Stacy
View More Testimonials