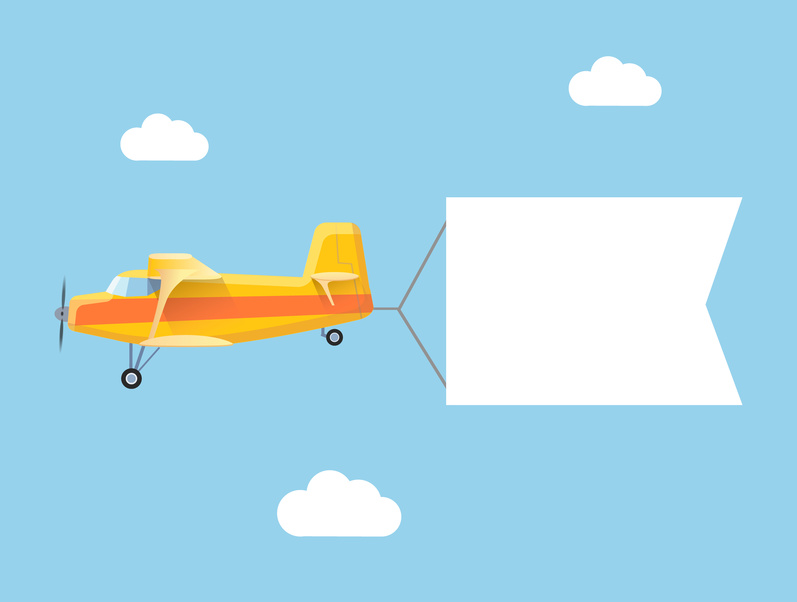 The advertising industry has seen monumental changes over the last few centuries. At one time, simply being able to share the written word with someone else was kind of a breakthrough. Then one day, a gigantic metal machine flying across the sky blew the minds of millions.

Airplane banners have been being flown since the early 1920s and they have lasted. even through the aughts and all the technological advancements that came with that decade. Plane banners have been effective for years — providing a large advertising reach with a relatively lost cost — but there is a chance that the aerial ad industry is going to use some new innovative technology in the near future.

Along with plane banners, skywriting is another form of aerial advertising. These sky-written messages can be visible for more than 2,800 square miles, and if the weather conditions are ideal, can stay in view for about 20 minutes. Pretty crazy that we have the technology to have a pilot fly an airplane and write messages in the sky.

Thanks to the help of some revolutionary technology, another skywriting service is on the horizon.

Drones
Automated skywriting could be implemented by some aerial advertisers soon, as drones now have the ability to be programmed to use LED lighting tech to write ad messages in the sky. These high-tech messages could last even longer than traditional skywriting.

Drones have been gaining some serious momentum over the last few years. What is now a $137 million industry can expect to reach up to $2.7 billion by 2022. Drones will be everywhere. This drone technology is rapidly changing so many industries: food delivery, law enforcement, and even wedding photography. Many more industries are being affected, but advertisers are surely looking to capitalize on the new drone fad.

“The pace of the drone industry,” said Keith Kaplan, CEO of Tesla Foundation, is “moving at light speed and there are no signs of slowing.”

Request a Quote
Remy is such a professional, made me feel so confident that he was going to be there, and believe me I interviewed a lot of other companies, but I decided to go with Remy for my pure confidence in him and he certainly delivered.  Your company is amazing.
Celeste Felico
View More Testimonials