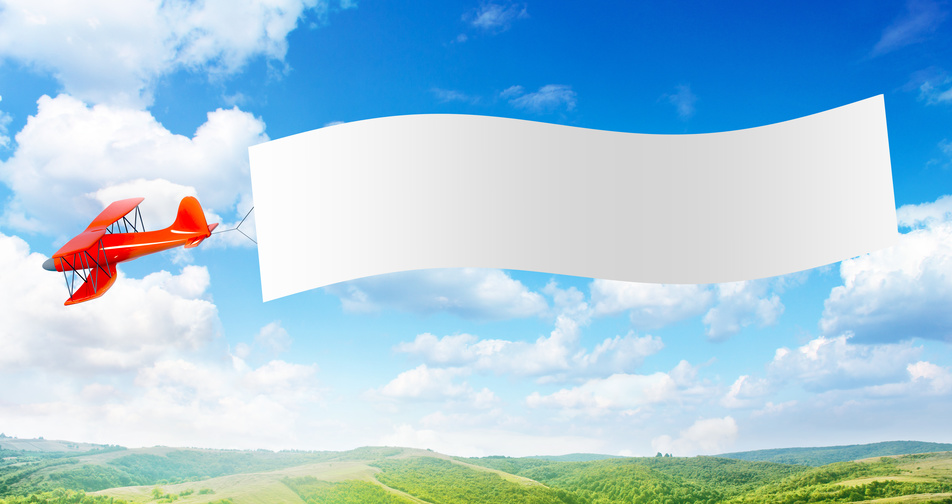 Are you looking for a way to advertise that will catch everyone’s attention? Do you want something fun and totally unique? If so, looking into sky banners, skytyping, and other aerial advertising options might be the perfect marketing technique. This type of advertising is perfect for capturing the attention of a large number of people, especially now that the weater is improving. Whether you’re advertising for branding, discounts and promotions, holiday sales, or grand openings, aerial sky banners can get the job done in a way that will make everyone stop and take notice.

How Long Have Airplane Banners and Skywriting Been Used?
Planes started towing advertising banners as early as the 1920s, when savvy businessmen decided to make the exciting new technology of human flight work for them. It caught on as planes became safer and more popular. Skywriting also soon took off, as pilots became more experienced with daring airborne maneuvers. In 1940, the Smithsonian reports that Pepsi wrote over 2,200 messages in the sky over 48 states, Mexico, Canada, Cuba, and South America! By 2001, the Federal Aviation Administration had signed off on around 600 companies that could run banner-towing services.

What are the Results Like From Aerial Advertising?
One survey showed that almost 80% of respondents remembered the product or service that was advertised on aerial banners. Not only that, but because of the brevity of airplane banner advertising, almost 70% also remembered at least half of the message from the ad! Compared to message retention from billboards and other outdoor, this is an excellent rate. Some aerial advertising campaigns can have a 20% response rate, and considering that many direct-mail or email advertising campaigns only have response rates in the single digits, this proves just how effective aerial advertising can be.

Of course, it’s best when used where large groups of people gather. For example, popular beaches in New Jersey are often quite crowded in the summer, and can draw around 1.5 million people in just one day, making it a perfect area for airplane banners to fly over. This is also why airplane banner advertising is so popular at major sporting events.

Concert venues, airports, popular tourist destinations, and beaches are all prime spots during the spring and summer. They also tend to target people who are in a fun and relaxed environment, which can make them more receptive to the message, products, or services being advertised.

What Should I Know About Aerial Banners and Skytyping?
Though aerial banners and skytyping can be highly effective and often provide a high return on investment, the average campaign can come with a price tag of just $450 per hour. Compared to the costs of TV or radio commercials — which usually get tuned out anyway — aerial banner costs are actually extremely low.

How Does Airplane Banner Advertising Actually Work?
Generally, sky banners have five-foot high letters for the best visibility. Planes will take hold of the signs mid-flight, going through two five-foot high poles that hold a rope connected to the banner. The banner gets tethered on during the process. It does take a skilled pilot to pick up the banner and keep it vertical for optimum viewing.

The best conditions for skywriting are cool, humid, windless, and clear days. In this type of weather, messages can be seen for 20 or more minutes and are visible for up to 30 miles. Generally, skywritten messages are about eight characters long and each letter extends for up to a mile. Pilots will start the process at around 10,000 feet for the calmest and coolest weather possible.

Think outside of the box when it comes to your marketing strategy — look into sky banners or skytyping to advertise your brand or service in a whole new way.

Request a Quote
It was so perfect and our pilot went above and beyond.
Preston C.
View More Testimonials