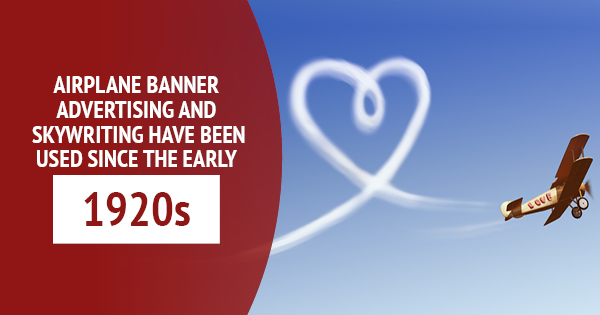 Have you been looking for a clever and unique way to advertise? Have you ever considered airplane banners or skywriting? Airplane banner advertising and skywriting have been used since the early 1920s, as an effective way for reaching large groups of people. Beaches, festivals, or other outdoor areas are prime spots for different types of airplane messages — indeed, densely packed beaches (like those found in New Jersey) can often have 1.5 million visitors a day. And airplane advertisements are usually eye-catching — people will point them out and pay attention, versus walking by outdoor signs or banners that hang in windows. Adding different types of airplane messages to airplane banners can be a great way to catch people's eye and get them to take notice.

What's the History of Airplane Banners and How Do They Work?
As mentioned previously, with the birth of airplanes, forward-thinking business owners began to use airplanes towing banners as a means of advertising. Skywriting soon followed. In just 1940, Pepsi scribbled over 2,200 skywritten messages over 48 states, as well as Mexico, Canada, Cuba, and South America, the Smithsonian says. By 2001, the Federal Aviation Administration had signed off on around 600 companies who could run banner-towing operations.

Skywriting starts at around 10,000 feet where the air is colder and more stable, with more pressure, which helps keep the smoke together. This allows the message to stick around for longer. The messages are usually about eight characters long, with each letter a mile tall! Skywriting relies on a skilled pilot who can execute aerial maneuvers that release streams of thick, white smoke to create the message.

For airplane banners, you need a banner, a towing mechanism, and a plane, as well as a skilled pilot who can get it off the ground and vertical. It's a complicated process, but in essence, the airplane has a harness that they control from the cockpit. One low pass picks up the banner and then climbs until the whole banner is in the air.

How Effective Are These Types of Airplane Messages and Skywriting?
This type of aerial advertising tends to be quite effective. A survey was conducted that showed almost 80% of respondents remembered the product or service that was advertised on the banner and almost 70% remembered at least half the message from the banner. Furthermore, some campaigns have seen a 20% response rate, which is a far better rate than standard advertising campaigns that focus on direct mail or e-mail. The airplane messages are distinct enough — and rare enough — that people look up and remember what they saw.

In ideal weather conditions (that is, cool, humid, and clear, without wind), skywritten messages can be seen for over 2,800 square miles and are visible from up to 30 miles away. They'll stick around for at least 20 minutes or more under perfect conditions. This means that thousands — if not millions — of people may see the message if the advertisement team chooses a dense location.

What Types of Airplane Messages Are There?
The sky is the limit! Airplane messages can advertise corporate branding, sales, specials, or discounts, holiday sales and awareness, new ownership, a changed location, or grand opening. They have a bigger reach than billboards, so if you're announcing something big, using an airplane sign or skywriting can give your exposure a big boost.

People may also use airplane messages for personal reasons, such as birthday or anniversary wishes or proposals.

Messages should be kept brief for maximum effect — and also so people can read them quickly as they fly by. Brevity is of the utmost importance with skywriting, as it might require multiple planes to be employed for longer messages.

Try a unique type of advertising that will set your business apart. Stay memorable with airplane advertising!

Request a Quote
We were amazed how Remy helped bring everything together in a matter of 4 days. We spoke to him Thursday and he had a custom-made banner flown on Sunday, just the way we wanted.
Suzanna Chuldjian
View More Testimonials