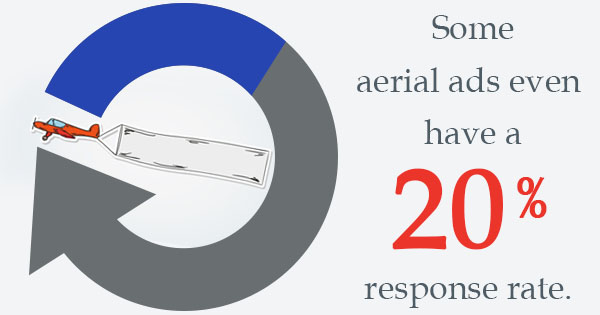 Why does it seem that advertising has gone from attention-grabbing, clever messages to annoying nonsense so quickly? For the most part, with the exception of a few creative and clever ads, people are just sick of the same old advertising strategies that have been going on for years.

Television ads are seemingly ripping each other off and churning out the same bland advertisements every month. Radio ads that used to have passionate voice over actors now sound like they have unhappy salesperson faking emotion, and — perhaps worst of all — the number of digital ads has significantly increased over the last few years. No matter what website you go to, whether you’re shopping or not, there are so many ads on all sides of the page, covering the page, popping out of nowhere, etc. It’s getting out of control.

That’s why it’s refreshing to see a simple, concise, and well-written airplane banner advertisement fly across the sky every once in a while. Airplane messages are great for companies that are trying to reach more people, grow their brand, and not annoy the masses like other forms of advertising.

Aerial advertising costs much less than these other forms of advertising and has the added benefit of not annoying anyone. If you see an airplane banner in the sky that you don’t like, you can simply look down and then go back to living your life. If you see an annoying TV ad, hear an annoying radio ad, or see an invasive online ad, yes, you can just shut off that particular device but that might frustrate you even more. There is no way to avoid these horrible ads while being exposed to all this multimedia, so our brains actively want something less invasive and annoying.

Airplane banner advertising is a great way for your business to market your brand to hundreds of thousands of people at a time, without annoying them like all the others. Some aerial ads even have a 20% response rate. It’s tough to beat that even after spending millions on digital advertising. Give the people a break from the ad clutter and advertise in the sky.

Request a Quote
Remy is such a professional, made me feel so confident that he was going to be there, and believe me I interviewed a lot of other companies, but I decided to go with Remy for my pure confidence in him and he certainly delivered.  Your company is amazing.
Celeste Felico
View More Testimonials