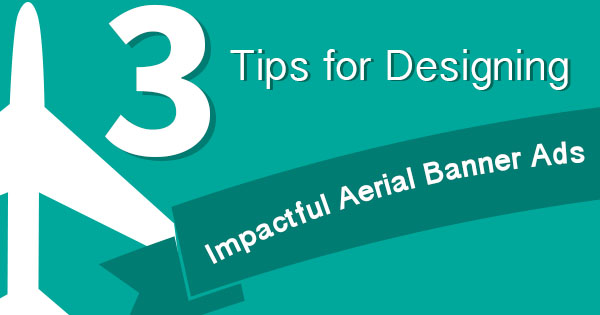 Aerial banner advertising can help companies improve their corporate brand, increase the number of customers, and can even bring in much more revenue if done correctly. Aerial advertising costs less than some other forms of media and can be even more effective.

Designing these banners is the most important part of the entire aerial marketing process. You can’t just throw some small wording and an ugly logo on a banner and expect your product or service to sell. You have to take the designing process seriously and handle each aspect with diligence.

Size of the Writing
The banners that are most effective usually have five-foot-high letters on them. Having the letters this large is important if you want your aerial banner advertising campaign to be successful. You want people to be able to easily identify what your banner says from as far away as possible. If you try to cram too many sentences on your banner and have to shorten the size of letters as a result, your ad will not reach nearly as much people. You should also make the text bold and avoid unusual fonts.

High Contrast
High contrast designs are important for banners because they will make it much easier to read as the ad travels across the sky. Many people seeing the ad will only a have a few moments to read what it says, so if you have too much going on, it’s going to be difficult for people to decipher the message. Large black writing over a neon green background can be very effective as it will clearly stand out in a bright blue sky and people will be able to see the ad for miles. For the best kind of writing, each letter and graphic should have sharp edges so they won’t look fuzzy from far away.

Defined Areas
Aerial banner advertising campaigns that overlap or blend different graphic elements together on the ad are not very effective. This strategy makes the ad look too cluttered and more difficult to identify from far away. You should have plenty of blank space on your banner. Never overlap text and images, and have defined borders around each graphic and letter.

Doing all this will make your banner much more effective and easy to read. Contact Aerial Messages if you want to start your own airplane advertising campaign.